“I asked, ‘Is there any chance that you could take a look at these and let me know what you think?’ And lo and behold, he took them to Florida and challenged a bunch of his professional buddies to play with them, and nobody could break them. They tried as hard as they could to break the tee, and they could not do it,” says Rochowiak, whose next order of business is getting his tees approved by the United States Golf Association so pros can use them on tour. “That would be a dream of mine, to have a tee that’s played on the tour.”

It’s a dream that started years ago when Rochowiak’s dad bought him a 3D printer for Christmas.

“He knew I was into that type of stuff. So I used it for knickknacks here and there and just made random stuff,” he says.

Fast forward several years to college, when Rochowiak was a member of Lambda Chi Alpha fraternity. He decided to make some golf tees for his fraternity brothers for when they would go out and hit the links.

Rochowiak uses a 3D printer to create his tees.

“I started making them with Lambda engravings. Slowly and surely, they started to get more complex. Then I noticed they were breaking really easily. That’s when my idea sparked,” he says. “With the availability of a 3D printer, I realized I could create something that could be designed and molded unlike anything that can be done on an injection molding machine. I might as well keep working and try to make something that’s going to be unbreakable.”

In addition to the novelty of an unbreakable tee, he was also driven by sustainability. The more golf courses and ranges Rochowiak visited, the more litter he saw from tees and their packaging.

“I was president of the Society of Plastics Engineers at Western, and I was really, really against single-use plastics. I still am today,” he says. “So having some sort of item that you can constantly use and don’t have to recycle—maybe the tees are a couple more bucks than you’d normally pay, but you might not ever have to buy one again.”

Rochowiak spent the better part of a year prototyping, failing and trying again. Using the set of skills and knowledge base he built in his academic courses at Western, he went through hundreds of models before perfecting his design, complete with a brass core, flexible outer coating and a line indicator to help the golfer determine whether their club is closed or open when they strike the ball.

“The College of Engineering (and Applied Sciences) at Western was really able to help me progress a 3D mindset, a creative way of thinking, a way of being able to think outside of the box and come up with solutions that I really didn’t even know were out there,” says Rochowiak. 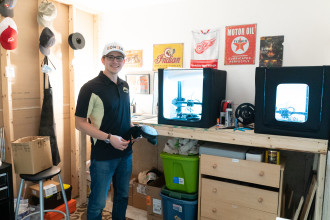 Rochowiak has two 3D printers in his basement with plans to expand in the future.

He started giving his new tees out to his fraternity brothers and the response was so positive, his girlfriend recommended he enter the 2021 Bronco Pitch Competition, which challenges students to pitch innovative business ideas to a panel of judges for potential cash prizes. Rochowiak’s business proposal—which he called the P & C Golf Club Swing Correction Tee at the time—won second place and the People’s Choice Award, earning him $1,700. One of the judges even purchased his tee.

“I was a senior, so that was kind of my last hurrah at Western. And I’m so thankful; it was a great send off, and it helped me get the supplies I needed (to grow the business). I was able to get a second printer; I was able to get the materials, cover the startup costs, get a label maker, stickers, packaging—I didn’t have to pay anything out of pocket to start the business.”

A year later, he’s rebranded as Bowden 3D, and business is booming. He’s sold more than 1,000 tees through his business website, bowden3d.com, and even signed a deal to sell them at X-Golf in Kalamazoo, with more locations on the way. Rochowiak also created a fully 3D-printed golf putter made out of carbon fiber nylon.

Rochowiak’s 3D-printed putter is made out of carbon fiber nylon.

“It’s so strong that I can take it and swing it like a hammer and it won’t break on the ground. It blows people away when I do that,” he laughs. He’s only made a few so far, but he plans to kick production up once he upgrades his printers. “It’s something that I think is huge; it’s not been done on the market.”

Rochowiak’s success is driven by the guidance he received at Western, through instructors like Jay Shoemaker, adjunct faculty and advisor for the Society of Plastics Engineers, who helped him realize that computer-aided design—something he considered a hobby—could be a viable career.

“I want, one day, for my work to be something that I’m super, super excited to wake up and do all day long,” says Rochowiak, who still maintains his “day job” as a sales engineer. “And being able to implement what Western’s taught me, what the Bronco Pitch Competition has been able to help me with and what the influence I have from some of the alumni at Lambda, I think I have all the keys and the pieces of the puzzle. Now I just need to act and make sure it happens.”